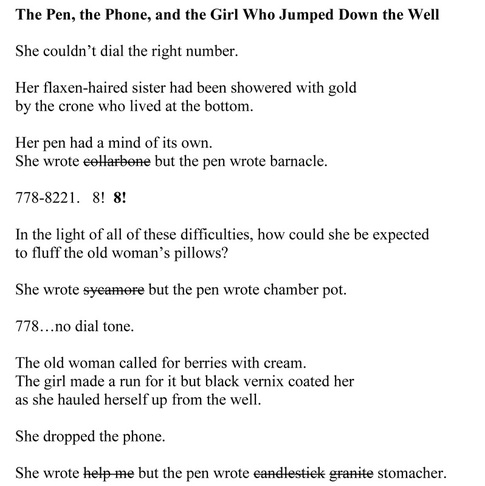 
Things that are silent:
ring fingers, eggshells,
shoes with no feet in them,
looking away, lost wax.
Leftovers again.
Tumors growing.
Ejaculation.

Things that may not be silent:
Phosphorous.  Mica.
The long journey down the fallopian tube.

Things that are middle:
the difficult child,
fingers,
the years between childbirth and divorce,
and the middle ear, which is reasonably
efficient as physical systems go.

Things that are reasonable:
My husband said that I was not.
He used his stethoscope to keep reason
trotting at his heels.
Be reasonable!  Calm down!
But I kept hacking away at the dining room table.


Interview with a man who has won the lottery eight times:


You have to have a strategy.  Stay with us for the latest developments.  As if the victims might rise and decline the bullets.
But the stars, the stars were like, like, like…
A frowning couple walks under them, each with a baby strapped in a sling, small holy goofballs beaming forward.
Most men remind me strongly of my autistic son.  Before him, Christopher Plummer.
Christopher is my strategy.
Turra lurra, hush-a-bye, wondrous way, and why, oh why?
We were going to live in that red farmhouse forever.  The house is still there, and red.
Every poem contains a picture of heaven and a picture of hell.

Suzanne Simmons is a poet and essayist whose work has appeared or is forthcoming in the New York Times, Smartish Pace, Fifth Wednesday, Perigee and other journals.  She holds an MFA in poetry from New England College and teaches at Manchester Community College in New Hampshire.